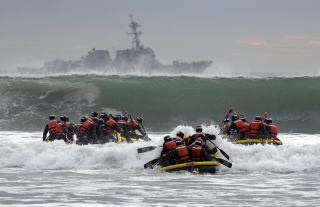 Sometimes you need a boatload of people to help you through. It’s a lesson Admiral William H. McRaven (retired) learned after a parachute accident that left him bedridden for months. The accident happened while he was participating in a Naval Special Warfare exercise involving a 1,000-foot free-fall jump.

McRaven, who served as the ninth commander of the U.S. Special Operations command from August 2011 to August 2014, got both legs tangled in his parachute because another parachutist was underneath him and opened his chute into McRaven’s falling body. When McRaven opened his own chute, his legs became tangled and the chute broke his pelvis and back, sending him into a lengthy recovery. He got through his convalescence, he said, with the help of his wife, colleagues and friends.

“In life, you need to make as many friends as you can, have as many colleagues as you can, and take care of as many strangers as you can,” McRaven said. The admiral was the closing keynote speaker at the (ISC)2 Security Congress this week in Orlando. It was a fitting close to an event underscored by the themes of resilience, being there for others and letting the human spirit drive your actions.

McRaven’s accident recovery was one of the many times in his life in which he had to rely on a team to accomplish his mission. While training as a Navy SEAL in the 1970s in San Diego, it was something he learned quickly. Exercises in BUDS training such as carrying and rowing a rubber boat in unison emphasized the importance of teamwork. If everyone didn’t row in time and at the same pace, it was easy to capsize the boat.

Talking about friendly rivalries during SEAL training, McRaven said trainees with a larger stature tended to pick on the little guys, calling them “the munchkin crew.” But the truth is, he said, those guys “were small but they kicked our butt at everything we did and it really made us mad.” They came from diverse backgrounds from all corners of the country, but their ethnicity, size gender and orientation didn’t matter. “The only thing that really matters is what’s in here,” he said, lightly tapping on his chest.

McRaven also talked about risk and failure – and how they often go hand in hand. “If you want to be great at what you do, whatever you choose to do, you’d better take some risks. And with risk comes failure.”

One of the ways Navy SEAL trainees learn about failure is when they get on the “circus list.” When a trainee makes a mistake, he can be punished with an extra two hours of calisthenics at the end of the day – that’s on top of all the strenuous exercises trainees must complete on an average day.

Trainees dreaded getting that extra two hours on Monday because it meant they’d start Tuesday feeling tired, which likely caused them to make a mistake that would earn them the extra two hours again, and the cycle would repeat itself. McRaven said some trainees who got the punishment on Monday would just quit. But if you can get through the circus list, he said, you come out stronger. More reps make you stronger in the long run, as painful as it is at the time.

“Nothing steels you for combat quite like failure. It is the nature of challenging environments,” he said.